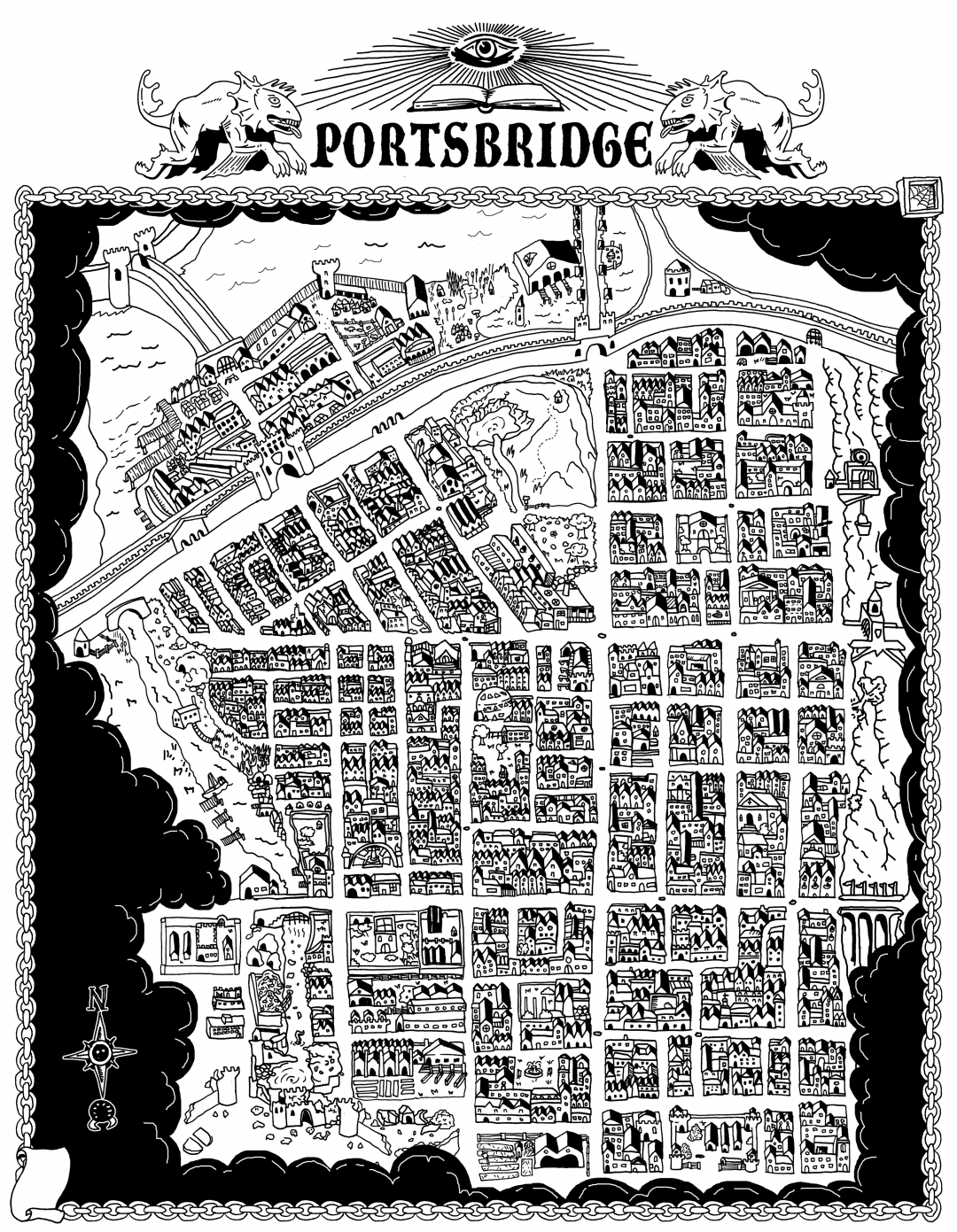 Our modest city has been shaken loose from the land it once knew as home, thanks to the sorcerous attacks and evil schemes of cosmic foes. After the Nemesis attacked and the Vile Mind attacked, our poor city ended up under strange stars.

Weird mists ebb and flow around the city’s edge. Sometimes they widen enough that we can see the farms and woods are still there. Sometimes we feel trapped in here, by those mists.

Who knows where we are now.

Portsbridge is the home base for our original Level Eater event series and the setting for our adventure series leading up to Level Eater 9. Come and play with us sometime!

Population: About 24,000; predominantly human, with significant populations of halflings and half-elves. The surrounding areas have long been home to roaming wood-elves. A small population of industrious dwarves returned to the city in recent weeks, following the departure of the Vile Mind.

Government: A council of alder-folk, drawn from all over the city, serve as stewards in the absence of a royal ruler. Different districts have varied traditions for selecting their alders, though many are descended from those appointed in times past.

Defense: The city is watched by several groups of guards and lantern-lighters. That largest group, part of the Sovereign Shield, works for the alders. Many nobles have squads of personal bodyguards. The city’s eastern edge is protected by a dry moat, dug out as a deep quarry in times past. The city has no standing army of its own.

Commerce: Most common goods or services were readily available here in the past, and the city fairly teems with butchers, tanners, and smiths. A few inns and taverns support visitors and adventurers in the city.

Organizations: Many, varied temples, guilds, and cabals, some of which hold significant power in city affairs, can be found within the city’s walls. They fall roughly into three key factions…

Three factions vie for the city, guiding it towards a future of their own vision…

In each prologue adventure, the starring players declare their character’s allegiance to one of the three factions. Every declaration of support increases that faction’s Power rating by 1 point. Characters receive treasure to use on their quest from the faction they support. The more powerful the faction, the better the treasure. Each faction offers its own selections of treasure, revealed over time as it grows in Power… 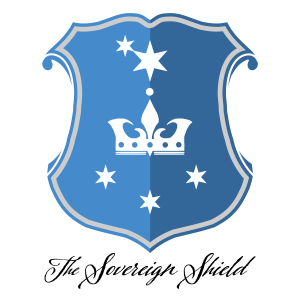 The city has strayed from its realm, but it cannot be lost. In the absence of rule by king and queen, loyalty to idealism and devotion to survival remain vital. Our ideals shall light the way. To feel fear is a mortal foible. To succumb to it, surrender to it, is damning. Make no small plans.

The soldiers, priests, and nobles of the Sovereign Shield uphold the law of the land, the order cultivated by past rulers, and strive to build works that can endure a chaotic world. The status quo is imperfect but it can be used to form a more perfect world, for those dedicated to the Shield are not wholly opposed to reform. They honor the past but know that the past cannot be reclaimed. Neither can it be ignored or rejected, however. As Lady Venski wrote, “We built so much to save us from chaos and fear. Why trade away everything we have built when that may leave us vulnerable to older dangers?”

Faithfulness — be it to gods or ideals — is central to the philosophy of the Sovereign Shield. They prize loyalty and temperance. Each soul has a pursuit at which it can excel, and to ignore one’s duty to excellence is a vice or even a sin. And there is no shame in a simple life. The farmer who excels at their work deserves respect and recognition, but it would be folly to promote them away from their field or flock. So it is that some are destined to lead.

Motto. “Leadership is the star that guides the way.”

Alignment. The Sovereign Shield is ideologically lawful, but individual members may be of any alignment. Those with good hearts seek prosperous stability for all that serve the whole and uphold civility. Those with evil ambitions seek stability in which they can enrich themselves and rule with authority.

Goals. Protect the city and its people. Discover threats and confront them before they can muster. Defend the strictures and the structures that make Portsbridge what it is and do not abandon hope to fear. Arm the state against attack, but never use the weapons of the enemy. Build a better world instead.

Typical Quests. Investigate crimes in the city on behalf of its rulers and citizenry alike. Patrol the streets by day and night, lighting the lamps, crying the hour, and keeping the peace. Stand watch at gates and atop the walls. Hold court with commoners, merchants, gentry, and nobility. Keep records of the city’s business and undertakings. Hunt and confront monsters within the city walls. Carry messages and escort goods throughout the city. 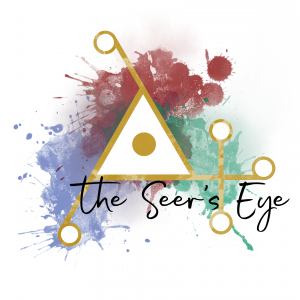 Our world is a crossroads, an intersection of myriad dreams, and if you go but a ways up the road, you’ll find other worlds there. They push and pull on each other — all these worlds — and if you know what to look for, you can see where the threads of fate are anchored to the land, to reality.

The Seer’s Eyes have arisen to support the apprentice of a great visionary, who was known simply as the Old Seer. The New Seer (Quinn Archer) took on the tasks of the Old Seer when the Old Seer was slain by minions of an evil invader — but he may not be ready. Agents and followers of the Old Seer, as well as various wizards and warlocks of the city, now work to find and understand the fateful forces at work on the city. Their mystic insights might save the land.

Do not mistake portents and prophecies for fate. We all have choices to make. But the city exists in a cosmic current of signs and omens, ebbing and flowing and pushing on us all. The Seer’s Eyes seek to prepare people for the choices to come, but they cannot spare folk from making choices. Or living with them.

Motto. “The signs foretell our choices.”

Alignment. The Seer’s Eyes are ideologically neutral, but individual members may be of any alignment. Some bend the faction’s rules in an effort to help people and better the city. Others exert mystic influence to bend fate itself to their own sinister advantage.

Goals. Investigate the origins and aims of creatures that roam the land. Interview those who practice magic in all its forms. Pursue an understanding of the mystic arts and the cosmic forces that act on the city. Uncover secret lore or, at least, suss out where it is kept. Seek out signs and symbols in the land, knowing that they may manifest in secret or by happenstance. Guide the people of Portsbridge to act with wisdom and forethought, so the city does not stagnate and suffer.

Typical Quests. Tracking and identifying threats to the realm, especially those with monstrous origins. Seek out symbols and portents throughout the land. Explore the misty lands surrounding the city—and the shadowy depths below. Recovering and cataloging artifacts and arcane treasures. Interviewing agents of other factions. Building and restoring structures so they befit the geomantic and astrological harmony of the city. Host seances. Bless weddings and funerals. Read entrails and perform augury. 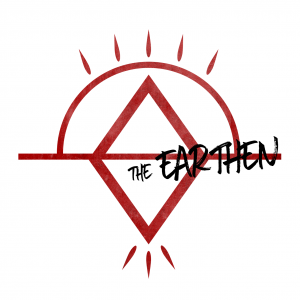 Everything changes. Power corrupts; that is how it changes us. Power is its own reward; it neither needs nor deserves respect. Power is temporary, like all things. Inheritance — of power, of wealth — sickens those who gorge on it. All walls crumble and hope cannot bolster them. Let go. Build new foundations, new towers, new cities.

As a whole, the Earthen are revolutionaries, but some are more emphatic or less patient than others. In practice, the Earthen are a piecemeal faction made up of many cadres, many visions, many groups gathering around the idea that power is as dangerous as it is essential to a civilization.

In its heart, the faction seeks to do away with stale traditions, dismantle the monarchy and its nobility, and build a new foundation for just rulership. They have the determination to do great things. But they lack the unity necessary to organize behind a common vision for the city.

Motto. “Only the heavens are above the land, but diamonds shine below.”

Alignment. The Earthen are ideologically chaotic, but individual members may be of any alignment. Earthen with good hearts work to free the populace from rigid cultural limitations so that each can pursue a life of their choosing. Earthen with evil aims want the power to rule their own fiefdoms in the aftermath of whatever revolt they can win.

Goals. Create space for new leaders and opportunities. Cultivate new forms of government and embrace those that benefit the city. Renew the loyalties and ambitions of common folk by championing art, enlightenment, and action. Resist tyranny in all its forms and combat those who would do harm to the citizenry. Turn the wheels of progress, no matter what crowns and banners may be crushed underneath.

Groups. The faction is made up of such groups as:

Typical Quests. Arrange protests and demonstrations against the stagnating nobility. Negotiate treaties and alliances between Earthen groups. Hold forums on matters of city policy and new governance. Dueling (and brawling) over matters of honor. Carousing. Collecting and distributing alms and food for the common folk. Painting art and raising statues to venerate new heroes and new ideas. Robbing from the rich to give to the poor.